Some colours and smile – in the Worldwide fight against COVID-19…

Ps: However the photo may suggest, I am not willing to be a target of any sort… 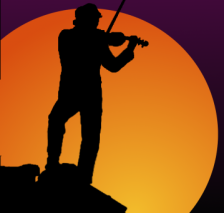 Andras returns to the stage, but this time as a member of a rather theatrical production, as he has taken the part of Avram in the Fiddler on the Roof production of BAOS.

Musical theatre has always been very important for and much favoured by Andras, in fact it has played a significant role in his passion for music and performing arts, however he has never really been in involved in any musical theatre shows. The time and opportunity have come now for Andras and everybody is welcome to the shows in March 2018 details & tickets here.

Find out more. Buy on iTunes. Buy on Amazon. Or in your favourite digital music store.

The first video from the new album New Chances (to be released soon) is here!

A new YouTube channel has been created for Andras:

and therefore all of his videos from the past were moved there, while the old channel was deleted.

Andras said: “All my videos had been uploaded to the YouTube channel of my management company for the past years and I wanted to have my own channel, reflecting my name. Therefore I made the compromise of losing all my views on the old channel in favour of finally having one under my name and basically reset the view counters and start from 0 again. So it is time to review my videos… Thanks!”

The new EP Jump Over The Line (The Extended Collection) is out as a digital release, available in all major on-line music stores, as well as here.

The EP includes 4 extended versions from Andras’s previous albums “It’s Showtime!” and “Remember the old days?”, as well as a previously unreleased (by Andras) song: She Is In Love With You, a live version from a concert as a bonus track.

The title of the EP (Jump Over The Line) points to the future: Andras is already working on his next full studio album that will be new and different from all aspects, except for one thing: it will (of course) be based on Hi-NRG music.

More about the new album later and back to Jump Over The Line (The Extended Collection): it is the closure of a period in Andras’s carrier and many changes are on the way.

Andras said: “It was time to move on, but since we had these extended versions almost 100% finished – as we used these during live gigs – it would have been a shame to just leave them on the hard-drives. So I thought this would be a perfect occasion to make them “release ready” in the studio and get them out for everyone to close the past few years.”

It is time for an extended dance now, but don’t forget to check in soon again for further news!