I have been reading the book of “Mixmaster” Phil Harding, telling the story of the PWL Hitfactory and his story there of about an 8 years period. It is the expanded version of the book and it is very interesting, it gives a 100% flashback to the era, but mostly to behind the walls (and scenes) of PWL.

Besides being very fascinating (although in some sections it is really focused on technical details and professional studio stuff, like equipment of the time) it also make me feel some sort of jealous – it must have been amazing to be there with all the ups and downs and fights within the building and in the music industry of the UK of the 1980s.

The best has been reading about some of the songs that I covered, their story of creation, how those were originally recorded & mixed and also comparing them to the procedure of us remaking. It is history.

This also brought some memories back to me, how my acquaintance started with Hi-NRG, especially with the hits coming of the conveyor belt of PWL and I realized: I have my own archives – the tape cassettes I still sore in box in our studio… 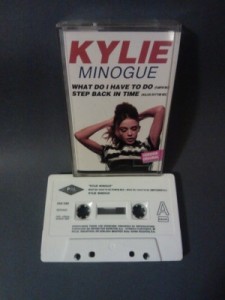 It all started in Spain, early 1990s, when I was at the beginning of my teenage years, during a family vacation. And of course it started with Kylie. I knew some her songs, really not a lot, but I also knew that whatever I heard of her was so great. I have had no records from her on my own, not I really knew that behind her is the trio of Stock – Aitken – Waterman. So one evening, walking in the pedestrian zone with my parents in one of those small, summer paradise towns on the coastline of Spain and in one of those typical shops for tourist that had a big, revolving display of tape cassettes I saw one from Kylie. It was a 4-track (2 track / side) cassette of What Do I Have To Do and Step Back In Time. I remember how nicely I was asking my mother to buy it for me. Well, she did and I have been storing it carefully for so many years along with many other tape cassettes of the old times, my musical archives. (For “gourmands” of PWL: it was a licensed version, released by a Spanish record label of the time, not an original PWL issue, but the tracks were original and pure Kylie with the unbeatable SAW music. A “double sided” single release of remixes of the two songs and an instrumental version of each.)